Chris recently joined the firm after spending 16 years in civil litigation handling all areas of insurance defense with an overall focus on large-scale litigation and multi-party cases in Federal and State courts throughout Texas. During that time he obtained significant trial experience including personally handling dozens of trials through verdict in courts across Texas. He further obtained substantial appellate experience in drafting briefs and participating in oral arguments in Federal and State Courts of Appeals, including the United States Court of Appeals for the 5th Circuit in New Orleans, Louisiana; the Texas Supreme Court; the Texas Second Court of Appeals in Fort Worth; the Texas Fifth Court of Appeals in Dallas; and the Texas Seventh Court of Appeals in Amarillo. Chris and his wife, Mandy, have two sons. He and his family are members of Highland Park Presbyterian Church. When he’s not trying to keep up with his boys, Chris also enjoys golf, running, and traveling with his wife. 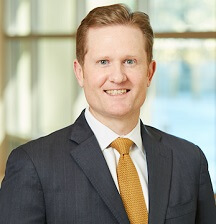